Hunsett Mill is a remote water pumping mill located in the historic Norfolk Broads National Park, situated beside the River Ant. The house was a residence for the Keeper of the Mill until 1900, when the advent of electricity rendered wind-powered pumps obsolete. Since the end of its working life, the house has been used as a private residence, but has remained an important piece of local heritage, standing adjacent to the well-known historic grade 2 listed Hunsett Mill.

Throughout its life in the 20th century, the house suffered from a series of ill-conceived extensions, added to alleviate the original house’s spatial shortcomings. All of these extensions negatively affected the setting of the original house and caused subsidence and repeated flooding. When the owners of the house needed further space, it was decided
not to add yet another incremental extension, but to re-instate the tiny19th century Mill Keeper’s house to its original proportions, with only asingle new extension added to one side.

In order for the new extension to retreat behind the listed setting of the mill, the new addition is conceived as a shadow of the existing house. By adding a dark volume to the existing brick volume and by virtue of the chosen facade geometry, the exact shape of the extension volume seems ambiguous from afar. When inspected at closer distance, the radically modern approach is mediated by the image of pitched roofs and dark timber boards that are a historic part of the Broads’ vernacular language. The massing and proportions of the new addition are configured to remain subordinate to the original building, yet the charred timber cladding helps it to settle into its context. The intervention appears as if it always belonged to the site, without reverting to false mimicry of the vernacular. The extension is made entirely from solid laminated wood, exposed as interior finish and clad in charred cedar boards externally. Ground source heat pumps, passive solar heating and independent water well supply make the house almost fully self –sufficient. Rather than adding on any more extensions, the design team decided to demolish all previous extensions and to return the cottage to its original shape, with only one new extension added in the back.
Planning restrictions allowed only very slight increase in floorspace over the previous dwelling, and imposed tight restrictions on roof heights, limiting any extensions to the ridge heights of the existing cottage.

The extension overcomes these limitations of size and height by creating a very open ground floor layout with three small, double height spaces that create an impression of spatial generosity and allow for the placement of large windows looking out towards the Mill and over the marshes. The open ground floor is structured by a fireplace and changes in floor level to create distinct kitchen, dining and living areas (3). The first floor contains all of the 5 bedrooms as well as two bathrooms, interspersed with the voids created by the double-height spaces. While some of the bedrooms are only 7 square metres in size, they use the space under the roof pitches, full height mirrors on some walls, large external windows as well as internal windows into the void and towards the ground floor living rooms to create a feeling of capaciousness.

Much like the original cottage, openings are arranged to first respond to the internal configuration. Every room is flooded with natural daylight, and blessed with framed views of the wind mill and surrounding landscape. Glazing in the kitchen rests on the worktops and permits views to the garden. Fixed panes of glass form a continuous surface with the cladding, to integrate with the geometry of the exterior and assure the air tightness of the interior, which relies instead on regulated stack effect ventilation through openings in the roof. 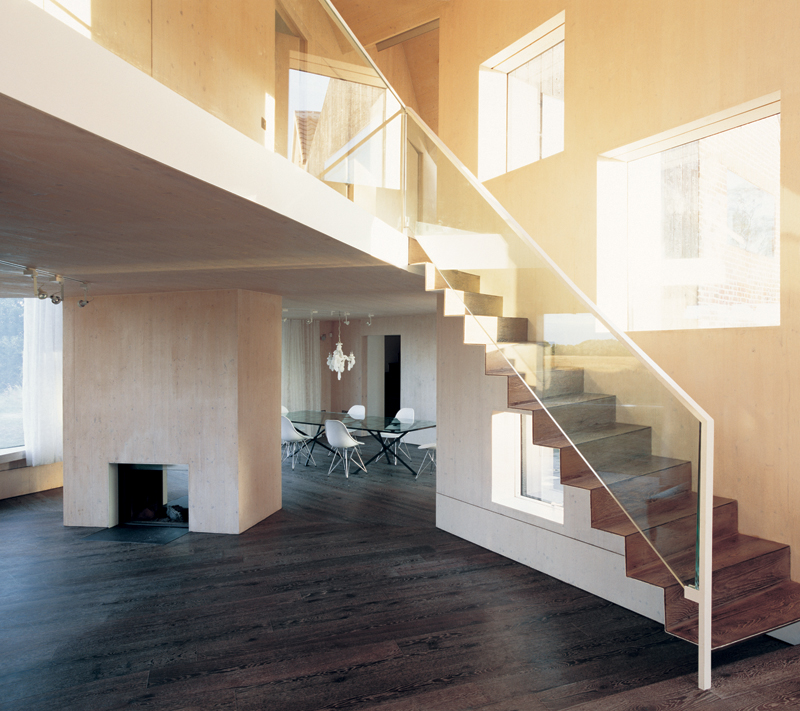 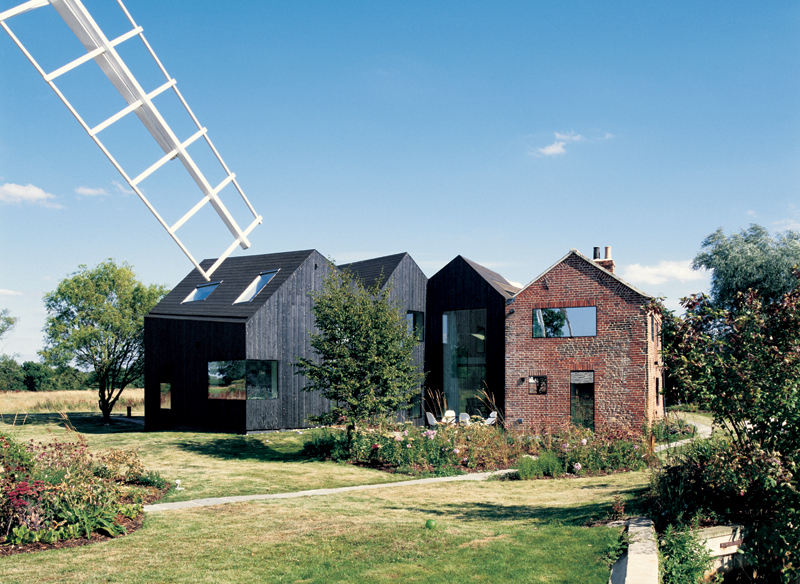 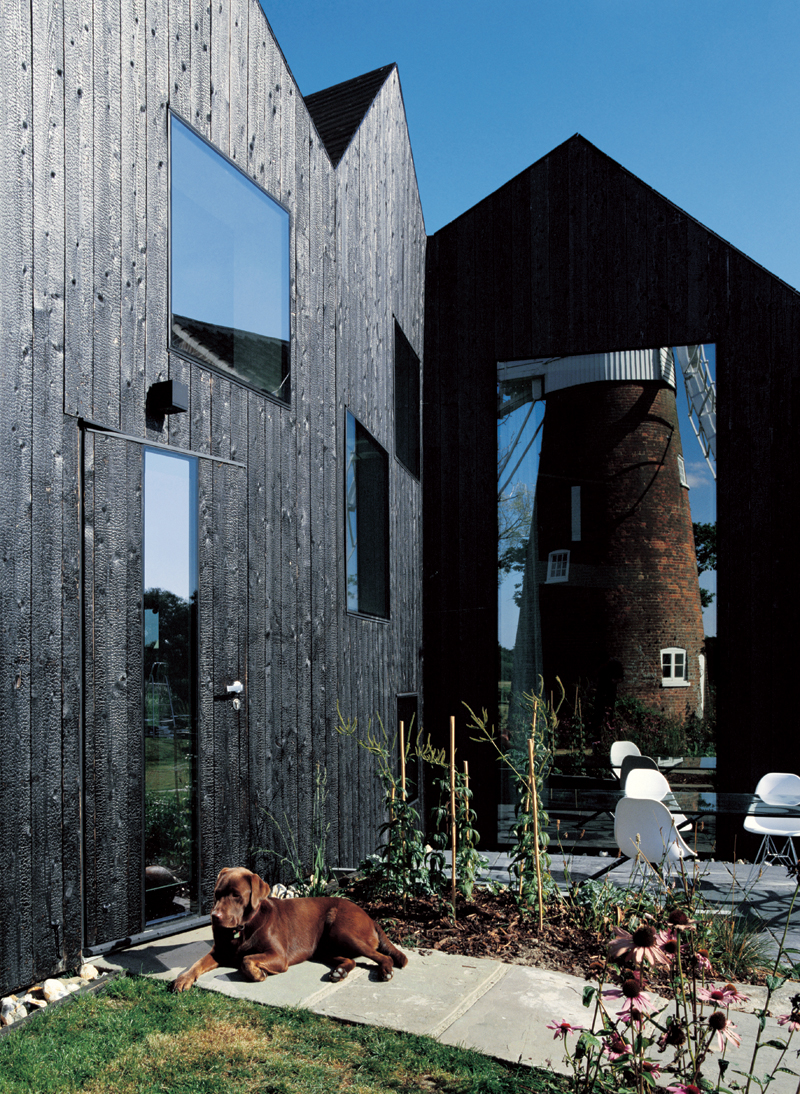 “Hunsett Mill, like a lot of really good architecture, results from one simple, strong idea. Instead of creating either a pastiche of the Victorian red-brick cottage, or a self-effacing glass box, the architects’ truly inventive solution was to create a kind of triple-shadow of the original, in black charred timber, crossed by the shadow of the neighbouring windmill’s arms. The overall impact is very arresting – more akin to the response to a piece of art than an example of rural, domestic architecture. The judges enjoyed the constant inventiveness of Acme’s approach seeking new materials, using intriguing structural forms to create interesting forms, values and visual effects”.

Ruth Reed, President of the RIBA